I’ve made recordings of train rides – I used to use my Sony DSC-W50 camera and just leave it in my pocket or put it at the window if I wanted the video, (more recently would be a tablet or smartphone).  I think I was inspired by my friend Gary doing a similar thing on the subway years ago…but at the same time, I’ve been recording crap since forever.

When I was around 8 or 9, my uncle Frank gave me a Sony-O-Matic portable reel-to-reel recorder with one tape and a take-up reel.  I guess it was intended for dictation.  I used to fill it up with batteries and record my friends outside with the included chrome-plated microphone.  Eventually, I took it apart to see how it works and failed to put it back together.  For reference, I am including a still of what I remember it looking like.  For diarrhea & giggles, I found this photo on YouTube.  This is not my photo. 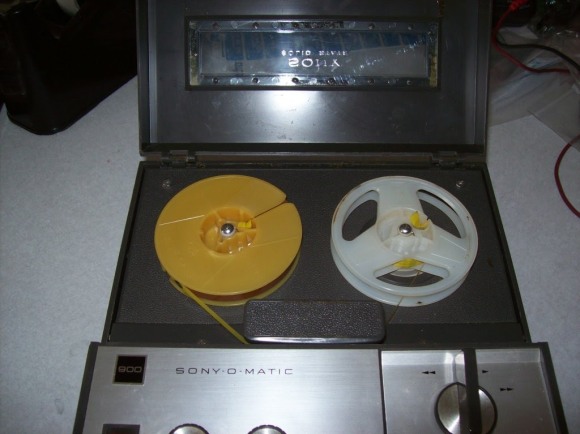 Much later, the same uncle gave me a Panasonic cassette recorder which I used for much of the same thing.  Of note was a series of used car salesman sketches entitled “Lemon Louie.”  As I got old I used this same little cassette recorder as a way to play music (via a manually inserted speaker wire to a very large homemade cabinet my father made in the late 50’s or so).  I even included it in bouncing experiments later when I got better stereo boomboxes and such – record one instrument on the tape recorder, play it back through the speaker while recording a second instrument on the boombox.  I recorded my first long-gone lost “album” this way with a mandolin and at least one song about a local Chinese take-out place, “Chin’s Kitchen,” (which one day will be re-recorded perhaps).

The boomboxes (I went through three) figured into more “field” recording in between blasting whatever Sabbathfloyddeadkennedystalkingheads thing I liked at the time around the neighborhood. I would make tapes of me walking around my neighborhood in the early 80’s – including the “coveted” stereo car drive-by from speaker to speaker and creaking neighbors gates.  Also did some skits with friends imitating animals in the forest, some formative music jams, a talk show and some insane clapping which turned into almost pure white noise due to recording back and forth so many times, (I still have that tape & a few others).  A friend once recorded some sound effects (for a school play I believe) when his friend screeched out of their driveway in a 60’s Mustang.

This particular friend – Jeremy was his name – was also a big influence in recording…as was the Beatles “Revolution #9.”  Jeremy recorded songs bouncing from 8-track (he had a recorder!) to cassette – all within his Sears- or JC Penney-bought bookshelf stereo system.  He did a great version of “I’ve Just Seen A Face” and he and I did an extremely primitive Beatles covers tape (which I still own, although partially taped over).  As for “#9” – well, let’s just say that this is what you get when you tell a kid that he can’t be in the orchestra – and don’t be surprised if he is still thinking about 40+ years later.  I was forever bugging my friends – “c’mon guys, let’s make a REVOLUTION.”  Always.

In more recent times, I figured it would be a good way to get raw material for samples or loops.  Again, at least partly inspired by a friend and fellow improviser.  I also used to use that thing for just getting musical ideas down quickly because it’s easy, you just turn it to “video” and hit record.  Batteries are good and seem to last.  I liked that camera so much that when I dropped it one time too many, I just found another on eBay.  Same model – from 2006.

Some highlights – I’ve recorded conversations.  I’ve gotten a really good Brooklynese thing at a Bay Ridge diner, a very noisy “bar car” on the LIRR (which I used as “crowd noise” by multitracking it over a section of a song I was working on) and some weird conversation at a sushi place.  I’ve gotten loudspeaker announcements and passing conversations.  Cars, toilets, trucks, trains and street musicians.  Winter bike rides and screaming kids. Things we always hear but rarely pay too much attention to.

5 replies on “Giggles and Train Rides”

What an interesting idea, Jimmy! I can see how your recordings would spur all kinds of creative efforts.
Taking things apart and failing to put them back together must be a rite of passage. 🙂

Thanks for reading this DanicaPiche. Through the magic of writing prompts and my own belief that all art process is the same thing on some very primal basic level, I realized that I express so many different things…perhaps like a child…just taking everything in and putting it through my own personal meat-grinder.

As for taking things apart – I eventually made a life for myself taking apart computers and software, so it’s a rite I have continued to pass through. How about you?

Your own personal meat grinder seems to be working very well for you! I haven’t tried the writing prompts but maybe I should….
Those are excellent skills! I haven’t taken anything apart in a while…I’m just working on a story :).